Devised and convened by Neil Mulholland, with Dave Rushton Institute of Local Television, I contributed to......

Shift/Work is an ongoing knowledge exchange between the School of Art, University of Edinburgh and Edinburgh Sculpture Workshop that develops and shares open educational resources for artists and art educators. The purpose of this workshop is to enable its participants to develop their own models of collaborative practice-based learning.

I contributed a presentation on Parade to Digital transformations, a research project that explores how cultural organisations contribute to new environments. Environments in which communities of participants interact to create, curate, organise and support their own cultural experiences.

Yes, I did once impersonate an art dealer. #art #market #currency pic.twitter.com/JelMEg6HiE

Please find enclosed the text of a lecture which I think belongs to you, I found it on a lectern at Chelsea College of Art and Design; as you will see it has been annotated by me.

I should like to explain that I gave the lecture on your behalf, in fact as you, at the Royal College of Art on the 24th January 2003. I was invited to speak about my work as an artist, but during my preparation I read your lecture and began to think how appropriate it would be, not to talk about my practice but to perform it in some way. So, I announced just before the lecture, that Neil Cummings was unable to attend due to a personal crisis, and that I, Rene Gimpel had agreed to stand in at the last moment.

I then read your lecture verbatim, using a selection of my own slides as accompaniment.

Sartre, Deller and me 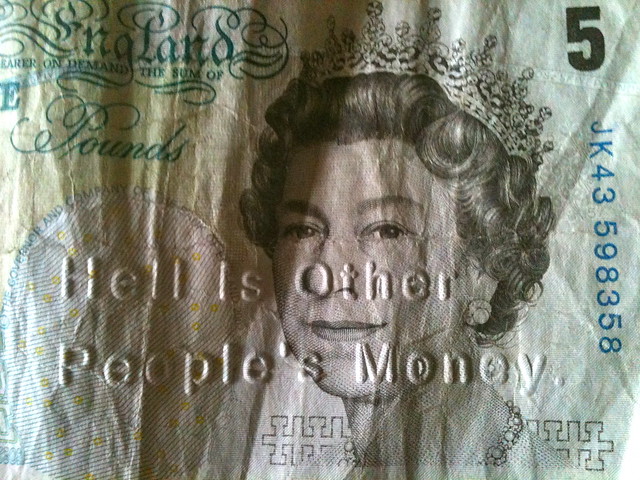 At the Jeremy Deller exhibition Joy in People , at the Hayward Gallery there was an embossing- press with a modified quote from Jean Paul Sartre. I took a five pound note out of my wallet, and impressed 'Hell is Other People's Money'.

It was a thrilling to see, and read about the history of woven, printed textiles and embroideries from fifth-century Coptic to Pre-Columbian Peruvian, late medieval Asian and Islamic textiles, and Renaissance to eighteenth-century European silks and velvets, even Barkcloth (tapa) from the Pacific region (image left: tapa from Papua New Guinea) and Africa.

Its thrilling because, many of the fabrics are not behind glass. You could, although discrete signage encourages you not too, reach-out and touch them. This proximity to stuff, and the trust implicit in its exhibition, is thrilling

I participated in Critical Practice's intense and provocative #ValueCamp