These are short extracts of a larger text comissioned by Anna Colin at Gasworks to accompany an exhibition of Olivia Plender. The full text will be online shortly, the publication was launched by A Prior

In Bouvard and Pécuchet, Gustave Fluabert distills the curse of the middle class into a deadly poison. Comfortable after a financial windfall, the two leisured bureaucrats, Bouvard and Pécuchet retire to the countryside to indulge their pleasure in knowledge. They buy, devour and study books on every subject that drifts through their attention. They read on agriculture, landscape gardening and food preservation, whereupon every animal they buy dies, crops wither, rot or burn, fruits waste and preserves are not. They read chemistry, anatomy, medicine, biology and think themselves doctors, whereupon they fail to treat or cure any patients, make themselves ill and estrange the local doctor. They read Romances, have romantic interests and quickly contract venereal disease. They study gymnastics, occultism, theology, philosophy and religion; they adopt an orphan to ‘improve’ who runs-away, they fall-out with the parish priest, argue with everyone around them, and finally contemplate suicide.

Bouvard and Pécuchet live amidst a pre-industrial culture of embedded knowledge, where ancient practices endure, even flourish. On the other hand, everything they know is learned vicariously, acquired, studied and accumulated as a capital to be re-invested. And yet, as their financial capital dwindles all their knowledge is returned to them as failure; incapable of feeding themselves, unable to socialize, Bouvard and Pécuchet are alienate from life itself.

Karl Marx’s succinct description of the 19th century industrial proletariat, were those whose means of reproduction – in this case labour – was ruthlessly expropriated. Flaubert’s satire, foresaw the middle class as a new cognitive proletariat. Adrift in a world of their own-making, alienated by knowledge.[.........]

A market connects peoples’ needs and desires, through material things, via mediums of exchange. Markets are a bundle of simple technologies interlocked to form an ecology.
And an ecology is not controlled by a sequence of genetic programs – like a species. An ecology integrates a variety of different animals, plants, resources and energy into a network of related interests. Similarly, an ancient bazaar or a contemporary distributive market enable the interaction of people, ‘goods’, knowledge, resources, energy and waste to be networked into a sustainable, self-organized and decentralized system. In competitive markets, participants seek to eradicate others, in the drive to monopolize resources and maximize financial profit. In competitive markets the ‘best’ financial price exploits the difference between the cost of resources, production and distribution, and the price paid by the ‘consumer’.Within distributive markets this logic looses its force. The ‘best’ financial price is that which reflects the co-dependency of the network of networked interests, and the aim of participants is not to destroy one another (antagonism), but like wrestlers wrestling, recognize the reciprocity necessary in any exchange. Its an agonistic market.

Distributive markets are networks of interrelated interests, and interrelated interests can only function – obviously - in useful combination with others. Markets therefore – as Simmel so perceptively observed - are social mechanism that enable people to swap, trade, bargain, compete and cooperate. Which makes transactions, first and foremost a communication praxis; and distributive markets communications technologies. Peoples come together to transact, perhaps for quite different reasons; they do not need to exchange equitably, or even communicate in the same language; all that is required is that they have some ‘goods’ to transact, and social conventions to enable the transaction - a distributive market.

Transactions are possible without ownership. All that is necessary – like language itself - is that one value be substituted for another, and that interested parties can apprehend the substitution. Values, values of all kinds can be made present, substituted and transacted. A transaction is not even attached to the ‘goods’ transacted, it’s the ability to make present or real, relationships between people. Social relations as deep, subtle and complex as this, could never be subsumed by financialization. [.....]

Banks are one such institution. Banks evolved to structure the flow of money generated by transactions in distributive markets. And yet in no time at all, money is itself transformed from a unit of account – signifying the value of a desire, into a medium of exchange: a commodity in itself, a ‘good’ to be transacted.
The miracle of banking, the mysterious value-creating function of banks resides in the gap between what depositors or savers’ deposit – the banks assets; and what they loan as credit to borrowers. Borrowers want something now that they cannot fully pay the price of. So credit sublimates the present of a desire. Desires transacted for a deferred price, cost more. Much more. Banks (and others) charge a fee, an ‘interest’ in the extension of credit. And in the cost of this interest, is where money gains a price.

Fractional-reserve banking is the practice in which banks keep only a fraction of their deposits in reserve – as liquid assets – and lend out the remainder to borrowers. This difference is called the money multiplier, a multiplier that expands the money deposited anywhere between 8 or 30 times.The multiplier is also a gamble, or in banking terminology a risk, a calculated risk, based on the assumption that not all the depositors will want their deposits back simultaneously.

Banks based on the fractional-reserve banking system have two major structural weaknesses. The first is where many depositors decide to withdraw their money over and above the ‘fraction’ kept by the bank as liquid assets – it triggers a ‘run on the bank’. The second is the credit risk; the risk that borrowers are not able to repay the ‘interest’ on their loans, and therefore default. Default on credit, and a loan becomes a debt. [......] Every loan or debt extended, multiplies the multiplier and increases the amount of value in circulation. Simple, slow, traditional Deposit and Loan banks began to multiply the multipliers with ever more sophisticated instruments for trading ever more abstract loans, debts and investments. They began investing in investments, and inventing investments to invest in. They developed ‘securities’ and bonds. A security is anything that can represent a financial value; like assortments of debt, promises, contracts and options to trade. They began to trade these securities and bonds in different kinds of markets, and to experiment with increasingly arcane instruments for trading. Multiplying the multipliers. One such arcane instrument is a derivative contract. Rather than simply trade a security (which could of course be a promise), traders in derivatives enter into an agreement to transact cash or assets over an agreed time-period, based on an evaluation of the future value of that security. Simply, the securities value might go up, or down, and that potential can be traded. The multiplier is multiplied. In turn, derivatives trades themselves are often ‘leveraged’, which means that multiple borrowings facilitate the multiple transactions. So even a small movement in the value of the ‘security’, amplified by the borrowings on top-of the derivatives contract, can cause vast shifts in profit and loss. The multiplier is multiplied. To mitigate against any seismic consequences lurking in a derivatives contract, a bank might ‘hedge’ the trade. A ‘hedge’ is a transaction, or a series of transactions to offset some of the risk, by entering into another derivative contract that anticipates shifts in value in the exact opposite direction to the original trades. The ‘hedge’ serves to cancel part of any potential loss, or profit. The multiplier is multiplied. To develop these ‘securities’ and the financial technologies to trade them in markets, banks borrow capital from other banks or financial institutions. They borrow against other assets or securities. The multiplier is multiplied. The cost of these borrowings, the risk of the cost of these borrowings, and these borrowings themselves are traded. Or, on-leant to other banks and financial institutions, and traded. And so on, endlessly. [.........]

The great long wave of financialization, in which every need and desire is reconfigured as an asset to be securitized and competitively traded, only succeeded in submerging the world in a deluge of financial technologies.

Flaubert’s 19th century satire of Bouvard and Pecuchet, has returned as tragedy. Adrift in a world of our own-making, alienated by a knowledge that returns to us as failure, we the financialized middle-class are indeed the new cognitive proletariat. And all the while, distributive markets endure, even flourish. Connecting peoples’ needs and desires through material things, via mediums of exchange, interlocked to form an ecology.

To imagine the world as a competitive market was to invite our own alienation from it.

A bazaar is an ancient word for a market, the word derives from the Persian bāzār, whose etymology goes back to the Pahlavi word baha-char meaning "the place of value".

The text is related to#TransActing, currency and market stalls 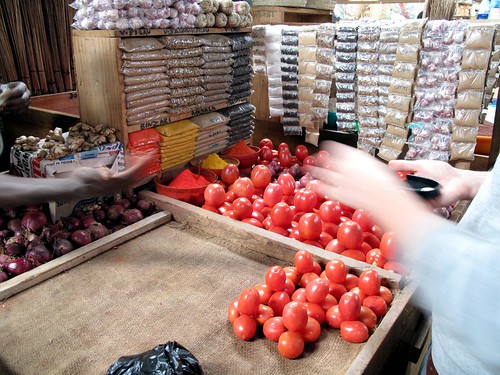