Below is an short extract from A Shadow of Marx a chapter I wrote in 2004 for  Companion to Contemporary Art Since 1945<  edited by Prof. Amelia Jones. The publication has an innovative structure, it mixes thematic sections with historical overviews, and is intended as a student 'primer'. This text looks through particular artworks to illuminate legacies of Marxist theory..............

A Shadow of Marx Its June 16th 2001, and I'm standing behind a rope barrier with a crowd of people in a sloping field, on the edge of a village in Orgreave, South Yorkshire, England.

On the other side of the rope are hundreds of people practicing how to perform a running battle.

They shout at each other; one side charges and the other retreats, and then vice versa. Some are dressed as police officers. I can see riot gear, shields, snarling dogs and even horses, the others, the civilians, are all men dressed in slightly out of date clothing, from around the 1980s. A voice comes over a loudspeaker system and a number of small two-person film crews with digital cameras mingle with the participants.

And then it starts shouting, charges, chanting, the throwing of surrogate stones and other objects, skirmishes; dogs are used and people are apparently arrested. The confrontation gets very violent and everyone surges into the far bottom corner of the field, and then the action stops.

All the participants move to another location obscured from my view, although I can see thick black smoke and smell burning rubber. Eventually a loudspeaker crackles into life and we are asked to move down onto a nearby road, where a terrifying battle is raging.

Cars are overturned and on fire; there is blood. Mounted police gallop down the road followed by a hail of thrown rocks and debris, confrontations flare up; beautifully choreographed violence leaves bloodied and injured men scattered along the road. A claxon sounds and the violence subsides. People stop skirmishing, help each other up, start smiling and hugging and begin clearing things away.

This is all taking place at the spot where, twenty years ago, 4000 striking miners from across the UK tried to stop coal moving into a coke works and were confronted by a force of 3000 police brought by the government to ensure the coal was delivered.

The pitched battle that ensued was one of the most bitter of an already desperate struggle between the remnants of unionized labour and a government determined to introduce deregulated markets as a disciplinary force. For many, this event was a defining moment for contemporary Britain.

The 2001 re-staging of the event, is one of the most powerful artworks made in England for as long as I can remember, Jeremy Dellers The English Civil War Part II, colloquially known as the Battle of Orgreave. This amazing event was conceived by Deller and organized through Artangel, an independent commissioning agency that works with artists to realize site-specific projects.

For the previous eighteen months Deller had been researching in and around Orgreave, talking with residents, ex-miners, local historians and the police. For The English Civil War, Deller meticulously reconstructed the battle, choreographing 800 people (including 300 ex-miners and police officers, some of whom had taken part in the original confrontation) in collaboration with amateur re-enactment groups, whose members are known for dressing-up as soldiers and replaying battles belonging to deep historical time.

On this occasion the historical battle was within living memory. The audience consisted of local people and a smattering of art-world types who had been persuaded to leave London for the day.

The event was, and is, difficult to describe because it occupied many different cultural categories at once: it was a work of art, a re-enacted battle, an extraordinary celebration, a truncated performance, a struggle to represent history and part film-set.

The film director Mike Figgis had been commissioned by Channel Four television to make a film of the strike using the reconstruction as source material, and this partly paid for the artwork. Overall, it was very difficult to pinpoint the experience in relation to a particular object or site, or even to acknowledge where the various components of the art project began or ended.

But over time, it became clear that Jeremy Deller had produced an extraordinary artwork, the effects of which are still reverberating.  [Deller had been nominated and eventually won the Turner Prize] We are, all of us, enacting a text written elsewhere.

Jeremy Deller's The English Civil War is a rich, profound and provocative contemporary artwork that uses the legacy of a Marxist cultural critique to bring one strand of this ideological text explosively into the present.

The Battle memorialized a profound historical moment, through denying us the luxury of forgetting its effects, and at the same time, it avoided reducing those complex social processes to illustration, entertainment or empty spectacle. The Battle challenges contemporary art to engage with important issues of social representation.

Deller deployed one of the most powerful tools in contemporary art, which is the use of research or fieldwork in the making of the work within a specific location.

Because the work of a contemporary work of art increasingly takes place through distributive, communicative or social networks, research is beginning to replace site specificity as a means of engagement between an artist and a location.

And it is now understood that the site, like the artwork itself, doesn't simply pre-exist its display and interpretation; both the work and its site are made simultaneously through the act of engagement.

In the case of The English Civil War, it is clear that an artwork as complex as this cannot be bound by the physical exhibition space of a gallery or museum.

The English Civil War exists differently for each of its different participants and audience members: from those who fought in the initial confrontation and collaborated with the re-staging, those who watched the re-enactment, to those who have seen the film, read the countless accounts of in magazines,  catalogues, websites, and journals the world over.

And now, even those of you reading this text.

One location of the artwork, one amongst many, is the social imagination.

Huge areas of our social life are spiraling into abstraction, largely as a result of the complexity of globally networked economies. The most basic functions of our daily life, even the simplest purchase of a pair of shoes, involve lines of debt and credit, chains of labour relationships and complex interwoven supply routes of materials, images and information which encircle the globe.

If art has traditionally been able to make visible and thus give form to the most subtle yet powerful of beliefs, it's not surprising that the most ambitious contemporary art would seek to engage with these forces.

In our networked economies the exchange of accumulated value as capital has becomes slippery and complex. It is no longer clear where the creation of value, the foundation of political economy, fits into our accelerated exchange of goods, signs, services and information.

The theory of value based on the accumulated profit extracted from labour, which emerged in industrial-age economic models and is principally identified with the work of Karl Marx, has little or no purchase on the possibilities introduced by immaterial labour.

The ephemeral products manufactured by contemporary cultural, entertainment and creative industries like museums and galleries or in public relations departments and advertising companies are difficult to represent. But what is clear, is that art is no longer a luxury by-product that can transcend political, financial and economic structures; it must be seen as central to these new economies. [......]

Jeremy Deller is one of a range of contemporary artists -including Thomas Hirschhorn, The Free Copenhagen University or Superflex - who are building on a legacy of institutional critique.

Artists such as Deller have turned their attention away from the institutions of art themselves to concentrate on the network of economic, political and social structures of which art is increasingly an integral part.

Rather than merely illustrating these structures through artworks and exhibitions, they attempt to vividly re-animate the world as experience through critical interventions. The encounter with art, the artwork or the event is no longer a passive encounter through the medium of display, but is articulated as a place of engagement and production.

Artworks are no longer viewed as points of origin, imagined to be founded on the artists creativity, or of termination, housed in museums and galleries or their stores, but as nodes in networks of exchange.

A Shadow of Marx is a chapter Companion to Contemporary Art Since 1945 edited by Prof. Amelia Jones, from 2004.

Read the almost full text, or see related projects like A Joy Forever, Enthusiasm, or the Enthusiasts Archive 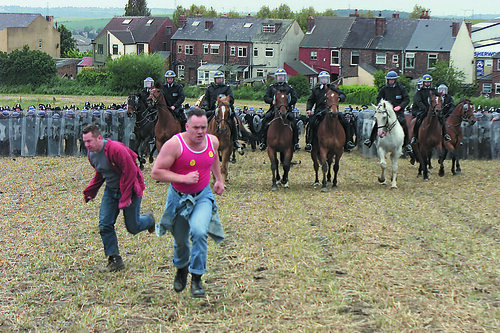