As part of Estuary an exhibition at the Museum of London, Docklands, I lead a cycling tour There is a total of about 1 hour of easy cycling and is suitable for participants with a moderate level of fitness.

Please bring your own bike!

We were twenty, and started by introducing ourselves; teacher, provost, people in marketing, students, economist, a set-painter, visitors and others. I began by sketching a history of the Museum's location in Docklands; how the docks were made redundant by downstream containerisation, abandoned by the 1960, and home to a few start-ups like Spitting Image in the 1980s.
We discussed how the 1982 compulsory purchases of Michael Heseltine's newly inaugurated London Dockland Development Corporation (LDDC) laid waste to the site, before installing the shiny towers of deregulated financial speculation (loadsamoney!) and riverview apartments for off-shore investment companies. We then meandered to the Limehouse basin, and I mentioned the formation in the 1960s/70s of Space Studios, Acme Studios and the seeds of Matts Gallery in the abandoned and squatted warehouses of Wapping, Limehouse and St Catherine Docks.

How artists had moved in, cleaning, repairing, installing services, caring, organising, investing, and investing without thought of an interested return.

We followed the Limehouse Cut, past the now gated community of Spratts Patent Limited, a 19thC redbrick former factory for manufacturing dogbiscuits.

The route is lined with ranks of brightly coloured, bolt-on-balconied, canalside loft living apartments. In Bromley by Bow we joined the intersection with the river Lea, up to Three Mills home to London's TV and Film Production studios, then north to the forcefield antagonism of the militarised Olympic site, Fish Island and Hackney Wick.

Under the shadow of the Olympic stadia and UK’s tallest sculpture, the ArcelorMittal Orbit, we cross to Fish Island, possibly the densest concentration of artists studios on the planet. We wander through the Space managed Bridget Riley Studios, and the adjacent former Percy Dalton peanut factory of the Britannia Works.

In an administrative building of the factory we meet artist/photographer Mark in his live-work studio. Mark invites us in, explains a little about his practice, and his Fish Island experience.  He's been here six years, he did the space up himself, heating, insulation, bathroom, its friendly, a community atmosphere, rough, a bit wild, anything seemed possible (less so now), regulation is moving in -trees planted, street furniture, paid-for-graffiti- his tenancy is only for one year at a time, a sense of precarity, rents are escalating.

We thank Mark and talk about Olympic legacy, about the tensions between, regeneration, gentrification and the monoculture of Docklands, Wapping, Limehouse, and the possibility of a more sustainable development.

We cycle past the improvisery Stour Space, 'a socially minded organisation offering exhibition, performance and studio space for the development of creative enterprises' it has a lovely cafe, gallery and studios. We cross the Hertford Union canal and meander through the light-industrial units of the Wick; car repairs, fish smoking, evangelical churches, cash-n-carry, bagel factory, German Deli (wtf!? a German deli?), shopfitters, dance workshops, more studios, an art book distributor, to visit the Bamboo Bicycle Club.

In the Directors Office of a disused sanitaryware factory (manufacturing has moved to China, they still distribute from a small warehouse nearby) amongst a host of other start-ups and enterprises, we meet James one of the co-founders of the club.

James explains that they run two-day weekend workshops to provide people with the knowledge and tools necessary to make their own bamboo bike frames -teaching craft skills and frame geometry, as well as creating a club for assembling, maintaining and learning about bamboo, and bikes!

Health and Safety look away now, James lead us up a rickety ladder onto the roof for a spectacular panorama of the Wick, the Olympic site and downriver to the towers of Docklands.

We leave James and cycle to the White Building, London’s new 'centre for art, technology and sustainability'.

It wants to be an incubator for big ideas and innovation, serve as a creative hub for artists to engage with technology, to be a beacon for local creative industries, and a resource for educational communities in the area. Its a new initiative by Space, who seem to be a big player in the area, and are expanding their historical role from a manager of studios, to provider of services necessary for a sustainable ecology for creativity. Like R-Urban Wick and their zine.

We stand on the canalside and sup micro-brewed pale ale from Crate Brewery, the sun is out, we chat, its glorious. The White Building is part funded by the London Legacy Development Corporation We rejoin the towpath of the Hertford Union canal and make our way to Old Ford, we double back to the Chisenhale Gallery.

Waiting for us is Amy, and she gives us a lovely tour of the history, purpose and programme of Chisenhale Studios. A group of artists were evicted from Butler’s Wharf in the late 1970′s and sought a more secure studio solution, they were eventually offered Chisenhale Works by Tower Hamlets Council.

The building had been derelict for a decade, it was a mess.

Previously it had been a veneer factory, spitfire propellers were manufactured there during WWII, then it was repurposed as a shoe store, which had eventually caught fire. Tons of rubbish had to be removed, roofing, electrics, glazing, walls and doors all had to be installed. The founding members took two years to self-finance and complete the work before forming the Chisenhale Art Place as a charity.

Initially, a portion of the studio rent paid for the running of a gallery, a gallery to showcase the work of the artists in the studios. As the exhibition programme evolved, matured, the gallery became more independent, international, sought arts council funding and became self financing. We thanked Amy, then wandered around the current exhibition of Mariana Castillo Deball.

Back on our bikes, we set off on the last leg of the route, down the Regents Canal to Matt's Gallery. Robin Klassnik, its founder and director, was waiting for us on the threshold, we were late, they were close to closing.... Robin then charmed us for twenty minutes, recounting how he walked into a studio space in St Catherine Docks in the early 1970s and realised there was nothing he needed to make.

Instead, he opened his studio as a gallery/production space, inviting artists to work/exhibit/make things there in a temporal chain of exchange. Time was provided as well as space. He moved to London Fields in a Space Studios building in 1979 to have a dedicated gallery space, eventually leaving in 1993 for a larger Acme Studios building (the current location in Copperfield Road), who were able to buy the leasehold in 1997 through charitable donations.

Soon after, developers added adjacent cannalside lofts. Matt's (its named after his dog) still has two gallery spaces, one open for the current exhibition and the other closed where the next artists is working on the subsequent one.

He's thinking of moving. We caught a glimpse of Jordan Baseman's installation Deadness, and were off.

The last biked section is down to the Limehouse basin, skirting the ring of Bellway Homes luxury apartments with moored leisure craft at its heart, across Ropemakers Fields and back to the Museum of London, Docklands.

Tired but elated, we chatted about looping through time and space, the fact that Docklands now looked different, that the creative classes are the shock-troops of urban development, and how it had been a great afternoon!

Thanks to the generous tourists, our various guides, and Claire Heafford of the Museum of London and the Papered Parlour 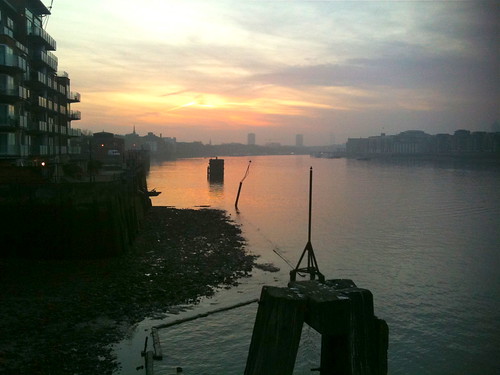