The second in Open Cinema's workshops was developed and lead by Ed Webb-Ingall.
Ed's research looks to recover, reactivate and revive the history and practice of community video.

Ed gave a brief  account, from 1968 to 1981 of the development of a medium and moving image style that continued the tradition of direct cinema (cinema verité) although with radically different in form and content—that of community video making.

Supported by public funding, the community video movement enabled groups and individuals to use a media that was often used to misrepresent them - through broadcast television, to  engage in new forms of collective self-representation.

After the introduction, Ed produced a simple camcorder, explained how it worked, how to record, zoom, pan, pause, etc.

See some images from the workshop.

Many months later, we decided to continue to develop If Community Was.., it slowly evolved into an ongoing, collaboratively produced, endless, collective portrait of what communities might be.

It's at times funny, others tender, glib, thoughtful, cruel, rambling, insightful and revealing, it seems to inhabit community rather than merely represent it.......... we screened the film at Home with great success, and its still ongoing. 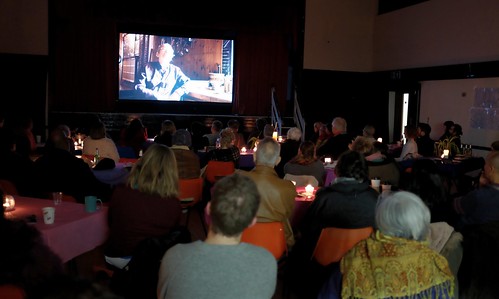