Over the weekend I went to visit the Cathedral de Córdoba, or Catedral de Nuestra Señora de la Asunción formerly the Great Mosque of Córdoba, or the Mezquita.

The site was converted from a Visigothic church in 784 by Abd ar-Rahman I.

Over three centuries the mosque was built and extended using repurposed building materials.

The 856 differently sized columns of jasper, onyx, marble and granite are scavanged from Roman buildings and Visigoth churches to form a forest of pillars.

This odd assortment of pillars - some are sunk through the floor, others extended by adding various bases and capitals - are roofed and the building unified by double arches of alternating red and white voussoirs; it's an architectural wonder.

After the Spanish Reconquista in 1236, a Roman Catholic church was inserted indide, and later (in the 15thC) a Baroque cathedral was plunged into the centre of the vast and beautiful mosque.

The two structures create a hybrid whole, agonistic architecture and an inspiration for Parade. The astonishing dome above the mihrab.

I'm reminded of my visit to the majestic Sultan Hassan mosque in Cairo, I've walked as a Pilgrim and the Ruta del Norte in 2009, and later discovered Arbroath Abbey 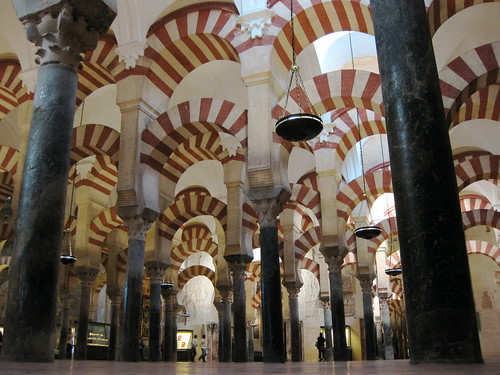