I participated in a book launch: Salomé Voegelin's - Sonic Possible Worlds: Hearing the Continuum of Sound hosted by CRISAP on Wednesday 17th September, 18:00-20:30 at the Podium Lecture Theatre at the London College of Communication

'Sound is like a dream, fleeting and difficult to remember and describe. Sonic Possible Worlds is a grand tour through the depths of ways of listening and responding' - Pauline Oliveros, Deep Listening Institute.

The evening began with readings by the Salomé, followed by a conversation with Angus Carlyle, around the possibilities opened by Sonic Possible Worlds for field recording and sound art; for a politics of listening and for the sound of unicorns.

Then there were responses to the book from Daniela Cascella, and myself, with a drinks reception afterwards.

The central thesis of Sonic Possible Worlds, is that at present traditional musical compositions and contemporary sonic outputs are approached through separate and distinct critical languages and histories. As a consequence, no continuous and comparative study of the fields are possible. In Sonic Possible Worlds, Salome proposes a new analytical framework to investigate works across genres and times. 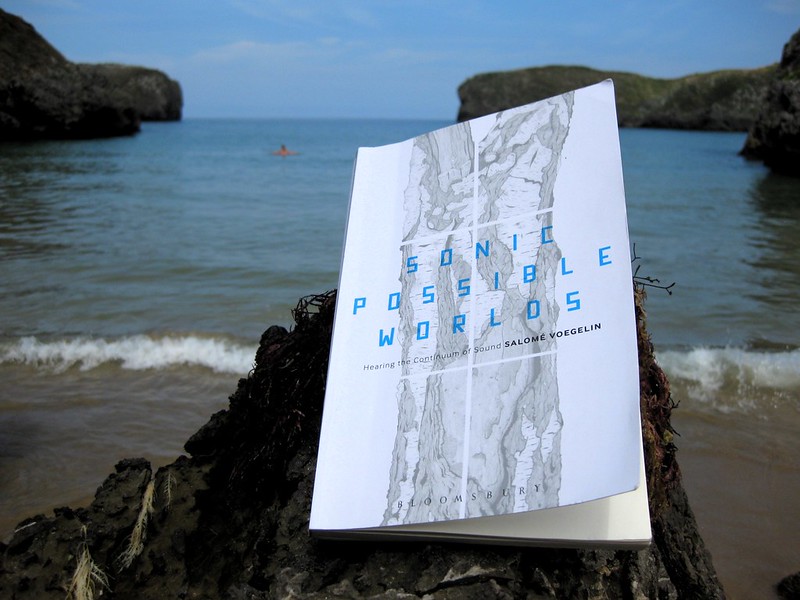 Hello, can you hear me OK?

It's very nice to be invited by Salomé to respond to her new book,

I really enjoyed reading it.

I guess it's the section that expands the possibilities, of these sonic possible worlds you've been hearing so much about this evening.

The chapter is called
“Listening to the inaudible: the sound of Unicorns”

It's where Salomé proposes to augment the possible, with 'the possible impossible', or the 'unheard', or the 'inaudible',

“Sounds that for various reasons we are not equipped, or willing to reach and experience.”

I have to confess that these are not my worlds, these worlds of attentive listening, …........I'm definitely not equipped.

Although I have spent a lot of time recently, thinking about, and participating in;
lets call it , futurity .

(and maybe this is why Salomé invited me)

I was also reminded of a quote attributed to Joe Strummer, from from the punk//pop band the Clash,

(and its the title of a great documentary, by Julien Temple, I think)

So, I've come to a generalisation, that although we may be able to sense events that are emerging, close to us – the ‘near future’ .... What Salomé calls, “the possible”

When we try and listen beyond this ‘near future’ we enter an  unmapped, or an unlistened to zone.

I'm struck by the fact that we are infinitely more comfortable in deep, distant and unknowable past, than in the middledistant future

I also think, that this unwritten future, the zone of uncertainty, the 'possible impossible', that Salomé is inviting us to attend to.......

Rather than being a place of endless possibility, opportunity, of excitement - and Angus mentioned the 'joy' in some of the writing through-listening-

Salomé and I chatted some time ago about the default position of pessimism, of dystopianism, that dominates the listening to future possible worlds

And in my experience of working with cultural organizations,

organisations that I take, and I think Salomé too, to be those we've assembled to nurture the 'possible impossible' -  galleries, museums,........... maybe universities

is that we operate in a very shallow timeframe. I'm tempted to say, a narrow frequency.

In the UK at least, organizations (at whatever scale) are scrabbling for resources.

They are working on aggregating resources for the next exhibition, or the one after that, …...... or the next semester, etc.

And, after the exhibition (or semester) is over, they are quickly forgotten as we scrabble towards the next one.

Few organisations have credible archives.
To help us remember

So, we exist in this narrow timeframe/bandwidth

Any aspirations or plans they might have, any scenarios -  are three or five year business, financial or operational plans.

Rarely are they creative, innovative or aspirational scenarios

So I have the feeling we imagine the future, the 'possible impossible' as something done to, or for us, by others.

Rather than something we can make together.

Of course, the future remains unwritten.

In the last chapter, Salomé invites us to explore scenarios,  possibilities – for the sonic, for art, for phonography, and for politics ............

“Of how things might be, if only we listened.” Salomé

'The inaudible' Salome writes 'is what challenges aesthetic givens and expands its imagination” it's “what we should learn to listen to, what writers need to insist on trying to hear and write about, and what curators need to make accessible in the staging of the work even if they do not hear it themselves”

“The inaudible is the real object of sound art and music education; training not to hear correspondences, the known, the referent, but to listen for what else might sound.”

I think it's a bit harsh on curators.
And I (generally) have less faith in artists than Salomé, because most are comfortable with tweaking the known.

For me, Salomé begins to hear and produce a much bigger challenge - and its something I have sympathy with

Salomé writes “The sonic materiality is there, but we lack the sensibility, will, and wherewithal to hear it.”

In this call for a politics of listening, (the will, and wherewithal) …........ I sense this lack as (an unheard?) political economy.

An (impossible?) sonic political economy produced by new relations - like listening through a continuum- , new networks and new institutions.

OBVIOUSLY – when I say institutions.
I don't just mean buildings, or administration and bureacracy

But institutions (in the ancient sense of the word) to reproduce the  values we value. More like institutions of care.

To create, encourage and reproduce these possible impossibilities,

and to produce them collectively.
(because I have a fear that artists, curators and attentive listeners (even virtuoso listeners) might not be enough)

Salomé writes “to listen for what else might sound, and to share them (these sounds) with others.”

Although clearly, listening to the 'inaudible' is not just about producing future possibilities, or impossibilities  - and to be honest, neither is my interest in futurity

Salomé's Listening to the inaudible: the sound of Unicorns, explores what we currently produce as the sonic present,

and what we do not.

And one of the things I heard while reading, was the sound of construction.

Its very enjoyable, thanks Salomé

An edited audio recording is available on Ora, voyages in listening, it was broadcast on Resonance 104.4fm on the 25th November 2014 at 8pm. The book is published by Bloomsbury Academic 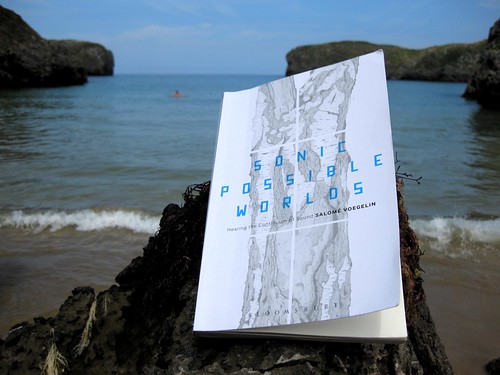