Many, many years ago in 1991 I made a recycled cardboard version of Pablo Picasso's Still Life of 1914. It was displayed as part of an exhibition entitled Sculptures at the then, newly-established Cabinet Gallery in London.

The sculpture was made by Picasso, from found, shaped and painted wood with a 'real' tasseled upholstery fringe in the spring of 1914. It's neither signed or dated so '1914' is circumstantial. Picasso gave Still Life sometime in the 1920's to the poet Paul Eluard. Eluard then sold the sculpture to artist, gallerist, collector and poet Sir Roland Penrose in late 1936 soon before he returned to London from Paris.

A photograph of the Exposition Surréaliste d'Objets at the Galerie Charles Ratton, Paris, in May 1936 shows Still Life hanging on the wall half hidden behind the vitrine. Interesting that this quintessentially 'cubist' artifact is in an exhibition of 'surreal' things. Incidentally if you look closely you can see the vitrine contains a [surprisingly small?] version of Marcel Duchamp's Bottle Rack 1914 and on the adjoining wall a [surprisingly big?] cut and folded sheet metal guitar by Picasso too.

Sir Roland eventually sold Still Life to the Tate Gallery in London in 1969, where it has resided ever since.

In the Tate exhibition catalogue The Essential Cubism 1907-1920 of 1983, Still Life is called Glass, Knife and Sandwich on a Table. I love this alternative title. It's matter-of-factness mirrors the everyday nature of the things depicted; a table, tasseled table cloth, bread, two slices of sausage, a glass, knife and the dado on the wall behind; as well as the prosaic found materials its made from.

I also made a cement fondu version

Related projects include Detail from the Collection, The Value of Things, Collected and this intervention in Loot 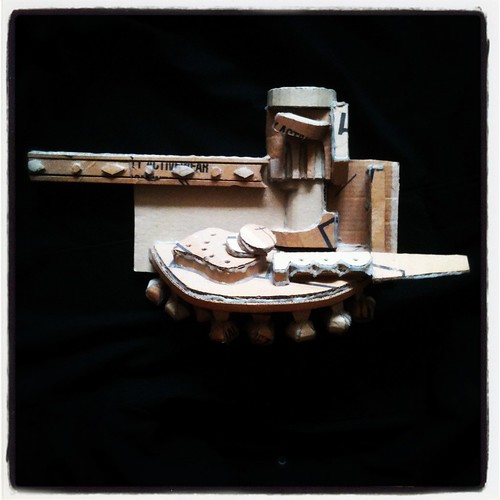