This public discussion based on Artist Placement Group’s discursive format The Sculpture explores Education: Not Knowing.

Inspired by APG’s working practices, I co-organised a Think Tank.

We met several times at Chelsea College of Art and Design and decided to convene a The Sculpture to explore the current drive to instrumentalise all aspects of creative education.

A possibility of ‘not knowing’ - inherent in APG’s formulation of the Open Brief- seems increasingly radical, subversive and productive.

Education: Not Knowing was a vibrant afternoon of discussion and exchange unfolding through five key APG themes: Placement, Education, Not Knowing, The Contract and The Gallery.

Our intention, was not to dwell on the history of APG, but to reinstall its mutating DNA into the present. Education: Not Knowing was organised in collaboration with Chelsea College of Art and Design, and the curatorial team at Raven Row.

Education: Not Knowing was part of The Individual and the Organisation: Artist Placement Group 1966-79 at Raven Row, London 27 September to 16 December 2012

This was the first retrospective of the pioneering artists' organisation Artist Placement Group, or APG, conceived by Barbara Steveni in 1965 and established a year later by Steveni and John Latham along with Barry Flanagan, David Hall, Anna Ridley and Jeffrey Shaw, among others.

Between 1966 and the turn of the 1980s, APG negotiated approximately fifteen placements for artists lasting from a few weeks to several years; first within industries (often large corporations such as British Steel and ICI) and later within UK government departments such as the Department of the Environment and the Scottish Office. APG arranged that artists would work to an ‘open brief’, whereby their placements were not required to produce tangible results, but that the engagement itself could potentially benefit both host organisations as well as the artists in the long-term.

Artists' work in proposing and carrying out placements will be represented here in diverse ways, in films, photographs, texts and correspondence and sometimes in art objects.

APG was a milestone in Conceptual Art in Britain, reinventing the means of making and disseminating art, and anticipating many of the issues facing cultural workers today.

It represented itself in a number of exhibitions and events, notably in the exhibition Art and Economics at the Hayward Gallery in 1971 with artistic interventions by Garth Evans, Barry Flanagan, John Latham and others.

Exhibition curated by Antony Hudek and Alex Sainsbury, in consultation with Barbara Steveni.

More images of the amazing Education: Not Knowing

Listen to the Sound Cloud resources from the day. 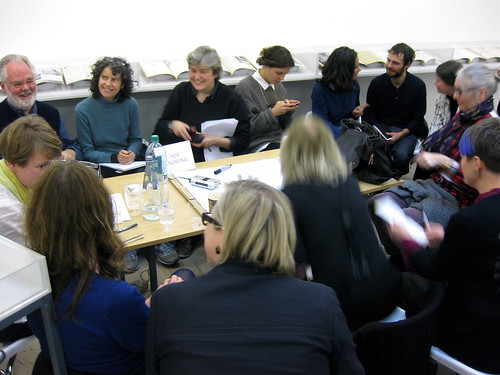