I have a long-held fascination with the Great Exhibition of 1851, and more generally the means through which we structure value through things.

As part of London's Open House weekend 2016 I visited a remaining fragment of a subway that connected the overground railway station to the relocated Great Exhibition building on Sydenham Hill.

Eventually the popular name for the spectacular building was bequeathed to the area, Crystal Palace. Even in its abandoned state the beautiful vaulted subway offers a glimpse of the luxury afforded visitors to the exhibitions.

As part of a book I co-edited The Value of Things (2000), I wrote about the Great Exhibition, below is an extract;

During the early 19th C, and modelled on the French Industrial Exposition of 1789, various trade associations in the heartland of English manufacturing organised displays of manufactured goods. These local displays were intended to encourage the design and production of things through competition - prizes were given, and give expression to the competition through public exhibition.

These exhibitions reached their zenith in England with the spectacular accumulation of things that was the Great Exhibition of the Works of Industry of all Nations of 1851. The Great Exhibition is an ideological break point within the narration of museum history, and indeed within the wider material economies of production and consumption. In the Great Exhibition new products of industry and the machines for their fabrication merged with more traditional art and craft in a previously unimaginable new leisure space, that of entertainment through spectatorship, in a temporary building so vast it enclosed mature elm trees.

Henry Cole a driving force behind the exhibition, describes its potential to the Royal Commission;

A great people will invite all civilized nations to a festival, to bring into comparison the works of human skill. The organization of this giant enterprise; the inclusion of every type of process of manufacture; the successful appeal to all classes of the population; the stimulation of trade, will commend this Exhibition to our ancestors, as it now does to ourselves.

The Great Exhibition of 1851, a Commemerative Album produced by the Victoria & Albert Museum 1950

Contemporary products appeared like museum exhibits, objects of art vied for attention with the latest technology, and everything was adrift amongst the carnival atmosphere of a public festival. Excitement and spectacle dissolved the traditional hierarchies between things, artifacts merged into the medium of entertainment. The Great Exhibition was the template for every museum, department store, shopping mall, trade and art fair thereafter, as historian Donald Preziosi suggests;

We have never left the Great Exhibition. 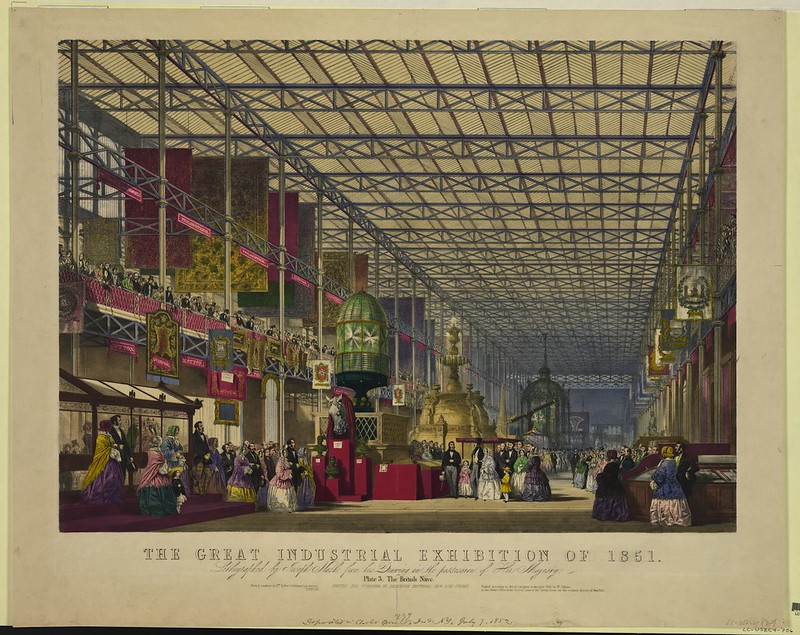 Joseph Paxton's extraordinary design for the exhibition structure was based on his experience of building commercial greenhouses, used standardized mass-produced cast iron components to support a glazed roof over an exhibition area of 19 acres, criss-crossed with two miles of display aisles, which became known as the Crystal Palace.

Located in Hyde Park, then on the edge of London, the Great Exhibition managed to attract some six million visitors, at that time a third of the population of England and Wales to marvel at the display stands of some 13,937 exhibitors.

A souvenir catalogue describes a walk through the parallel galleries and lists the things one would encounter;

The Art Journal Illustrated Catalogue, a souvenir of the Great Exhibition of the Industry of All Nations 1851, The Proprietors, London 1851

Perhaps its not surprising to find the most perceptive of late 19th C art critics, Charles Baudelaire writing a critical review of the Parisian, Exposition Universelle some four years later. The review teases critics and historians -particularly the neo-classical descendants of Johann Winkelmann, and Heinrich Heine - for their failure to accommodate the stunning variety of artifacts, from disparate countries, into their “ classical systems of universal beauty”.

Baudelaire identifies a shift in vitality from the traditional ‘Fine’ arts, to the modern products of industry, and recognizes a lack of a critical language to accommodate and map the change.

The review also breaks a tradition of art criticism in side-stepping an aesthetic elite, and directly addresses the middle class, which of course Baudelaire recognized - and detested - as the new public, and hence the new force in matters of taste and value.

Baudelaire captures a major anxiety inherent in 19th century metropolitan society: that values are no longer implemented from above through a restricted economy of things, but fluctuate and pulse throughout a varied field of machine-made artifacts.

The stunning material display that was the Great Exhibition lasted a mere six months, and yet it crystallizes many of the forms through which we subsequently learnt to be modern.

Historical memory, enacted through a ritual encounter with the past through things - the museum experience- meshes with the full force of the always and already commodified present. The complexity of such an encounter produced an intoxicating mix of competition, capital, people and things, the Great Exhibition was a hallucinatory flash of a future to come.

In 1852, as a direct consequence of the Great Exhibition, the government founded the Department of Practical Art under the Board of Trade which was to oversee the founding of a new museum under the auspices of Prince Albert and the influential Henry Cole. The Museum of Manufactures, now known as the Victoria & Albert was founded on the profit -£186,000- from the Great exhibitions of 1851, and the nucleus of its collection purchased from the finest exhibits 'By the Gains of Industry, we promote Art'

Extract from the Value of Things, which also formed part of the research for A Joy Forever and the Anthropocene Walks. 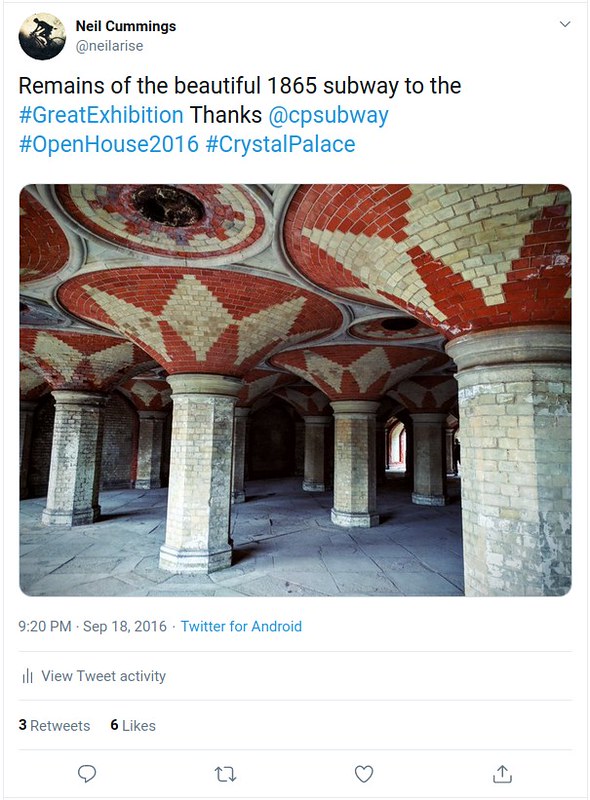