Lapdogs of the Bourgeoisie

I was in Cairo in November 2008 to shoot a short film for an exhibition entitled Lapdogs of the Bourgeoisie. It's in a ‘reality’ TV style. A broadcast ‘trailer’, in fact a synopsis of a future programme. Its a copy of Faking It.

Lapdogs of the Bourgeoisie explores issues of class in contemporary art. Faking It is all about class.

My film Lapdogs collapses down two versions of class, one historic and the other contemporary. The historic is that inscribed within the premise of Faking It series - borrowed from George Bernard Shaw's Pygmalian, itself based on a scene in Ovid's Metamorphoses, and better known as My Fair Lady with Audrey Hepburn - class marked by education, occupation, taste, aspiration, and - after Marx- rights over 'the means of production'.

In this traditional sense of class, the labour of the working class person is expropriated by RDF media.

RDF media also own the property rights to the Faking It TV format.

They sell those broadcast rights worldwide. Immaterial properties have been described as 'the oil of the 21st Century' and the begining of a new class divide. So the contemporary figure of the working class is doubly exploited. First labour as entertainment, second as property.

I'm trying to sell Lapdogs as a TV format, in countries outside of RDF media's reach.

You can view the film, read about the accompanying book published by Sternberg Press, study the Lapdogs script, see how the project was installed at the Arnolfini in Bristol, peruse a Guardian review, or look-at more images of the shoot in Cairo.

Lapdogs was first exhibited at the Townhouse Gallery in Cairo, where I had a sharp lesson in political economy. 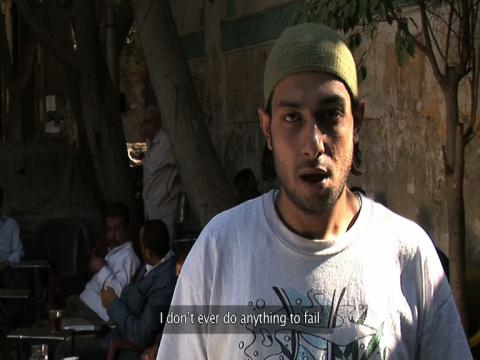