I spent Sunday afternoon at the Public Assembly convened as part of the Occupy London protest.

It was inspiring to participate in real-time public democratic organisational processes and decision making. It's something I have been familiar with, on a smaller-scale, as part of Critical Practice and specifically the Parade project.

At the Public Assembly of over 500 people on the steps of St Paul's, #occupylsx collectively agreed the initial statement below.

Please note, like all forms of direct democracy, the statement will always be a work in progress.

1. The current system is unsustainable. It is undemocratic and unjust. We need alternatives; this is where we work towards them.

2. We are of all ethnicities, backgrounds, genders, generations, sexualities, dis/abilities and faiths. We stand together with occupations all over the world.

3. We refuse to pay for the banks' crisis.

4. We do not accept the cuts as either necessary or inevitable. We demand an end to global tax injustice and our democracy representing corporations instead of the people.

5. We want regulators to be genuinely independent of the industries they regulate.

6. We support the strike on 30th November and the student action on 9th November, and actions to defend our health services, welfare, education and employment, and to stop wars and arms dealing.

7. We want structural change towards authentic global equality. The world's resources must go towards caring for people and the planet, not the military, corporate profits or the rich.

8. We stand in solidarity with the global oppressed and we call for an end to the actions of our government and others in causing this oppression. A nested sub-group of demands was developed and ratified by the Public Assembly on Friday 28th October, aimed at democratising the City of London.

• An end to business and corporate block-votes in all council elections, which can be used to outvote local residents.

• Abolition of existing "secrecy practices" within the City, and total and transparent reform of its institutions to end corporate tax evasion.

• The decommissioning of the City of London police with officers being brought under the jurisdiction of the Metropolitan police force.

• Abolition of the offices of Lord Mayor of London, the Sheriffs and the Aldermen.

• And a truth and reconciliation commission to examine corruption within the City and its institutions.

See some more images from the day.

The occupation (re)enacts many of the experiences of the Media Squares event I contributed to, and has overlaps with a reflection on self-organisation, making Jigs, a text about community formation and Trash into Treasure 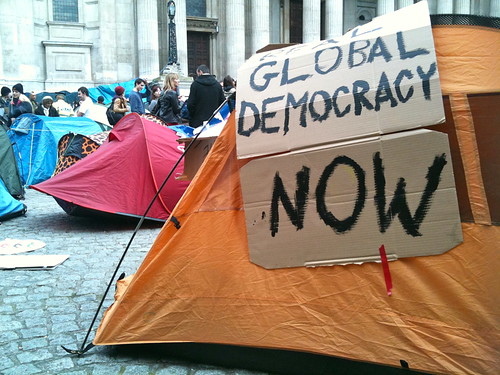