I've been visiting the Shabako Stone, at the British Museum, for as long as I have been living in London. It's a source of wonder.

In the twenty-fifth Dynasty, sometime around c700 BC, an Egyptian mythological text was incised for eternity in a basalt stele. The text contains an account of the creation of the world by Ptah, God of Memphis and patron deity of craftsmen.....

.....For the very great one is Ptah, who gave [life] to all the gods and their kas through this heart and through this tongue, in which Horus had taken shape as Ptah, in which Thoth had taken shape as Ptah. Thus heart and tongue rule over all the limbs in accordance with the teaching that Ptah is in every body and every mouth of all gods, all men, all cattle, all creeping things, whatever lives,.....

At some point Memphis was sacked, the stele broken, lost and centuries later re-found. The stone was repurposed as the base of a mill, a mill for grinding corn. A square hole was cut, the 'eye', to locate the central mill shaft of the grinding stone. Shallow radiating furrows were cut to conduct the flour from the milled grain as the top stone turned. Decades of grinding grain slowly obliterated the centre of the text. My wonderment in the Shabako stone is that an ancient creation myth has been overwritten by an image of one of our own; the big bang.  Several millenia, and several orders of things have been fused into a single artefact; a hyperfact.

The stone was given as a gift to the museum by Earl Spencer in 1805, provenance unknown

I have a lifelong interest in the materials of culture, the institutions we evolve to organise those materials, and I've recently  intervened in twitter with the #ObjectOfTheWeek. 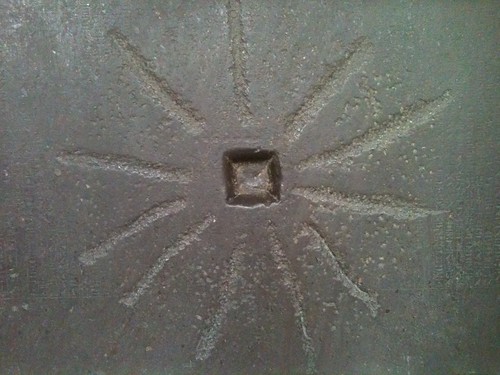