I've been thinking about things, how they're imagined, produced and circulate for some time. Living near Brick lane in London, which used to be a vast flea-market, has encouraged me to think about the material underside of consumption.

A flea market connects peoples’ actual needs and desires, through things, sometimes material things via mediums of exchange; transactions. Flea markets are a bundle of simple technologies interlocked to form an ecology.

And an ecology is not controlled by a sequence of genetic programs – like a species, an ecology integrates a variety of different genetic programs, animals, plants, bacteria, viruses and energy into a network of mutual interests. Similarly, a flea market enables the interaction of people, ‘goods’, knowledge, values, desire, rumour, energy and waste to be networked into a resilient, often self-organised and decentralised system.

A flea market is not designed, and yet there is a recognizable coherence, a beautiful logic of practice at work; something we could recognise in an ancient bazaar, a 19th century marché aux puces, 20th century flea, thrift and street markets, and even in contemporary digital exchanges.

‘In Brick Lane, as in street markets everywhere, an adjacency of products evolves.

Stolen bicycles for instance, their various parts and sub parts - and the feral youth that traffic them - accrue to one another near the edges of the market, where lines of vision and routes of escape are relatively accessible.

Further in, out-of-date-stamp comestibles, food without provenance, bizarrely named sweets, piles of rotting or misshapen vegetables, damaged delicacies and mountains of cakes, stick together in a sick parody of the supermarket aisle.

A milling crowd of men browse stalls piled with new and old tools, and tools for tasks long forgotten, so long forgotten the implements take on the patina of museum artifacts from cultures long deceased.

Household goods merge with an array of furniture – from broken rubbish to high-design collectibles are all washed-up on the market from capsized businesses and sinking domestic arrangements.

Pirated software, games and pornography, compete with carelessly copied DVD’s - their presence in the market so premature, they precede the official product release - cell phones, sim cards and ‘instant unblocking’ (a guy with a laptop) merge into piles of ‘remotes’, black goods and TV’s, to form a recycled silicon valley.’

I wrote this note sometime in 2001

Read an account of an earlier anthropocene drift, a related Waste walk, things temporarily missing, and a man on a plate. 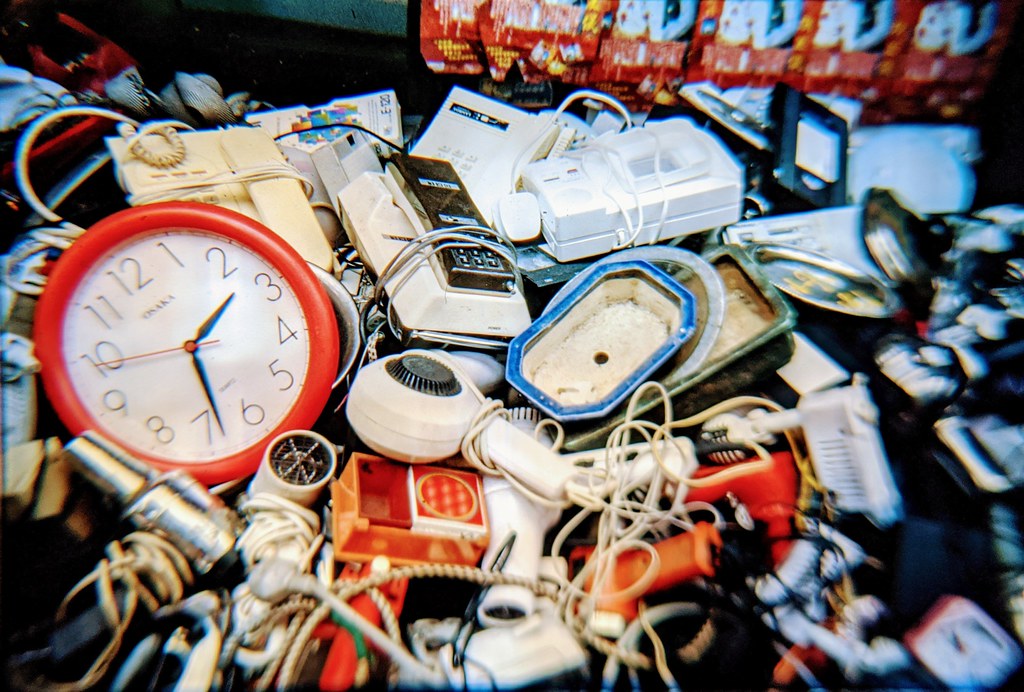